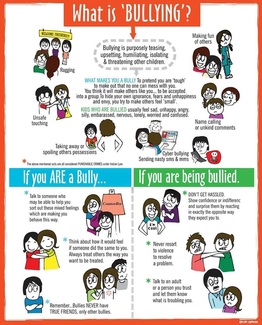 Bullying is not necessarily a matter of physical intimidation, where the big bully overpowers the small, the weak and the meek. Bullying can come in multiple forms of ill-treatment, and is the repeated exposure of one person to physical and/or emotional aggression including teasing, name calling, mockery, threats, harassment, taunting, hazing, social exclusion or rumours.
Often times, especially with emotional aggression, it is not one aggressor but a whole group of aggressors, and mute spectators that participate in the bullying of one or a few targets.

As children, many of us go through bullying - often both as a bully and as the bullied.
Often times, parents, families or those supposed to care for the children, allow the bullying to happen with the intent that the child will learn to cope with it, that their natural abilities will assert themselves and that the child will learn to survive. The 'real' world, they reason, is a tough world and one needs to learn to deal with bullies.
The reality is that the real world is tough because we let too many bullies and bullied people graduate into it without being challenged, and the behaviour continues well into adulthood, in their workplaces, relationships and in the families they create, making for a vicious cycle of bullying.

What happens because of bullying?

Bullying has its impact on everyone involved: the bullied, the bully and the by-standers.
Being the object of bullying can take a heavy toll on the bullied person. It saps one's sense of self, including belief in one's competence, safety and motivation. This reflects in the person's general well-being, and can be seen in loss of appetite and energy, loss of sleep and loss of motivation. The impact is visible as a drop in performance, disinterest in social and professional activities, increased cynicism, fear and anxiety. It might lead to dropping out, depression and health complaints. In extreme situations, the bullied may also self-harm or contemplate/ commit suicide. Even when the bullied person manages to exit the situation, it might leave a longer-term mental health impact, including post-traumatic stress, difficulties in inter-personal relationships, persistent fear and anxiety and other issues.
For the bully, while in the immediate term there may be the illusion of power and its rewards, often it creates difficulties in forming and maintaining relationships. Bullies in school often don't develop adult coping skills, and find themselves resorting to violence and further bullying, which might lead them to criminal behaviour and its consequences. Often, they find themselves growing into social isolation as well.
Bystanders who have allowed the bullying to continue face their guilt. Fear of being bullied themselves might lead to unhelpful choices, and such persistent behaviour which is in-congruent with their own thoughts and feelings can lead to a negative self-assessment, feelings of worthlessness and tendencies to compensate for it in some other way. Bystanders sense of guilt may also lead them to feeling depressed.

​There clearly are no winners in bullying.

Cyber-bullying is as vicious and hurtful, sometimes even more so given that the virtual space might make it more accessible to exhibit bullying behaviour for people who may otherwise not have access to the bullied person, or may not have as much power in the real world. With technology being what it is, and how things can go viral in a largely unsupervised virtual world, real and made-up/ morphed material can quickly harm a person, and may be much harder to undo.
Keeping a watch on access to networks, ensuring privacy of information online, and keeping a balance between real and virtual lives are important starting points.